France’s President Francois Hollande denounced the Democratic Republic of Congo’s rights record, calling for an end to the conflict in the east as leaders of French-speaking nations met Saturday.

Only some 15 heads of state of the Francophonie organisation’s 75 member countries were present in the parliament building in Kinshasa alongside their host, DR Congo’s President Joseph Kabila.

Hollande, who has angered Kinshasa by saying the human rights situation in DR Congo was unacceptable, drove the point home in “frank and direct” talks with Kabila just before the summit opened.

Speaking after other meetings with representatives of the opposition and NGOs, Hollande said: “Francophonie is not just the French language.

“Speaking French also means speaking about human rights, because the rights of man were written in French,” a reference to the Universal Declaration of Human Rights drafted by French revolutionaries.

Violent rebellions and ethnic conflict gripping eastern regions of DR Congo were expected to feature prominently at the summit.

So too was the situation in Mali, where radical militants have seized control of the north of the country.

Hollande dismissed a claim by the leader of one militant group that his support for military intervention against the extremists in control of northern Mali had put the lives of French hostages at risk.

Oumar Ould Hamaha, a leader of one of the rebel groups allied with Al-Qaeda in the Islamic Maghreb (AQIM), said Hollande had also put his own life on the line.

“The lives of the French hostages are now in danger because of statements by the French president who wants to wage war against us,” said Hamaha, of the Movement for Oneness and Jihad in West Africa (MUJAO).

“His own life is now in danger. He needs to know this.”

AQIM is currently holding nine Europeans hostage in the Sahel region, six of them French.

From Kinshasa, Hollande rejected the comments.

“It’s by showing great determination to stick to our policy, which is that of war on terrorism, that we can convince the hostage-takers that it is now time to release our hostages,” he told reporters.

Kabila was greeted with tumultuous applause as the summit opened.

Elsewhere in Kinshasa however, police used tear gas on dozens of stone-throwing demonstrators opposed to his regime who had defied a ban on protests. They claim Kabila’s 2011 re-election was riddled with fraud.

Kabila spoke about “an unjust war imposed” by outsiders in the east of the country.

“While our people are sparing no effort to improve their lives, negative forces beholden to outside interests have for several months worked to destabilise our country in North Kivu province,” on the eastern border with Rwanda, Kabila said to the summit.

He did not specifically mention Rwanda, which it has accused of backing rebels there — a charge also brought by UN investigators. Kigali denies the charges, and Rwandan President Paul Kagame has stayed away from the summit.

Hollande had earlier condemned the “outside attacks” in eastern DR Congo, where Congolese troops are battling several militia in the mineral-rich region.

He called for renewing and if necessary reinforcing the UN mission to the country (MONUSCO).

The 14th Francophonie summit, which runs through Sunday, will also likely focus on the future of an organisation that has struggled for relevancy since its creation in 1970. 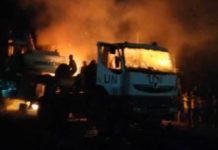 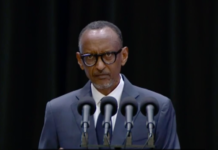 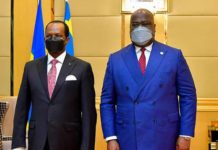