January 21, 2019, was Day 2 of the inquest in the assassination of Patrick Karegeya on New Year’s Eve of 2013 in Johannesburg, South Africa. Both the prosecution and the judge dropped bombshells. The prosecutor disclosed that there are ”close links” between the Rwandan government and the men who killed Karegeya. The presiding Magistrate Mashiyane Mathopa responded by ordering the investigators to explain “what, if any, steps have been taken to arrest the Rwandan suspects, since their whereabouts and their identity are known.” Magistrate Mathopa gave the prosecution 14 days to show the measures undertaken to arrest the assassins. The Magistrate could not fathom why the case has been dormant for five years. As he put it, “the prosecution knows who and where the suspects are and what needs to be done.” These individuals have already been named in court — they are Apollo Kirisisi Gafaranga, Alex Sugira, Samuel Niyoyita, and Vianney Nshizirungu.

The Karegeya Inquest appears to be turning into a trial.

The developments in South Africa’s courtroom recall the proverbial expression of chickens always coming home to roost — meaning that one’s offensive actions are likely at some point to haunt him. And so it is with Kagame. The question is, will Kagame surrender the four men to South Africa? If he refuses to handover Gafaranga, Sugira, Niyoyita, and Nshizirungu, will Kagame not be confirming his infamous statement that he hits his adversaries at the right time? Be that as it may, the five-year injustice to Karegeya and his family is ending. As Magistrate Mathopa aptly stated in court, “Justice delayed is justice denied.” 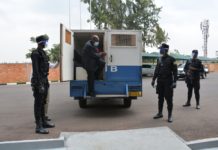 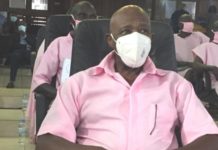 The family of Paul Rusesabagina reacts to his show trial that started on 2/17/2021 in Kigali, Rwanda