South Africa has accused three expelled Rwandan diplomats of links to the murder and attempted murder of Rwandan dissidents living in South Africa.

The diplomats were expelled on Friday following an attack on the home of exiled Rwandan dissident Kayumba Nyamwasa in Johannesburg.

Rwanda denies involvement in such attacks in South Africa.

It retaliated to the expulsions by ordering out six South African diplomats.

Mr Radebe’s spokesman, Mthunzi Mhaga, told BBC Focus on Africa that investigations “revealed direct links between the expelled diplomats and the criminal networks that relate to the recent attacks on Rwandan officials who are under protection in South Africa”.

Armed men raided the home of Lt Gen Nyamwasa, the Rwandan army’s former chief of staff, last week, but he was not there at the time.

The attackers ransacked the property, and left with a computer and some documents.

Gen Nyamwasa has survived two previous assassination attempts, including a shooting in Johannesburg in 2010 after fleeing Rwanda.

He sought asylum in South Africa after falling out with Rwanda’s President Paul Kagame.

In January this year, the body of a Rwandan former intelligence chief turned dissident, Patrick Karegeya, was found strangled at a hotel in Johannesburg. He had apparently been murdered. 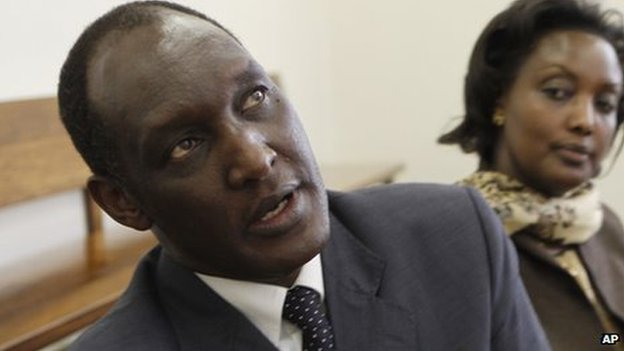 “As the South African government, we want to send a very stern warning to anybody, anywhere in the world, that our country will not be used as a springboard to do illegal activities,” Mr Radebe said at a press conference, Reuters news agency reports.

The expelled officials had violated their diplomatic status by being associated with “illegal activities that have taken place where there were attempted murders, including a murder”, he added.

Rwandan High Commissioner to Pretoria, Vincent Karega told Reuters that South Africa had not produced any evidence linking the diplomats to the attack on Gen Nyamwasa’s home.

“If there is any proof of Rwanda doing such a thing, we can react, but as far as we are concerned we haven’t seen any proof,” he is quoted as saying.

Gen Nyamwasa and Mr Karegeya were co-founders of the opposition Rwanda National Congress.

Both were part of Mr Kagame’s rebel forces that came to power in 1994, ending the genocide of their fellow ethnic Tutsis.

Rwandan dissidents in several Western countries, including the UK and US, say local security agents have warned them of plots to kill them.

Shortly after Mr Karegeya’s death, Mr Kagame warned that those who betrayed Rwanda would face “consequences”.

South Africa was once a staunch ally of Mr Kagame’s government, and had sold weapons to it.

However, relations have become strained in recent years following the attacks on the dissidents, and differences over the conflict in the Great Lakes region.