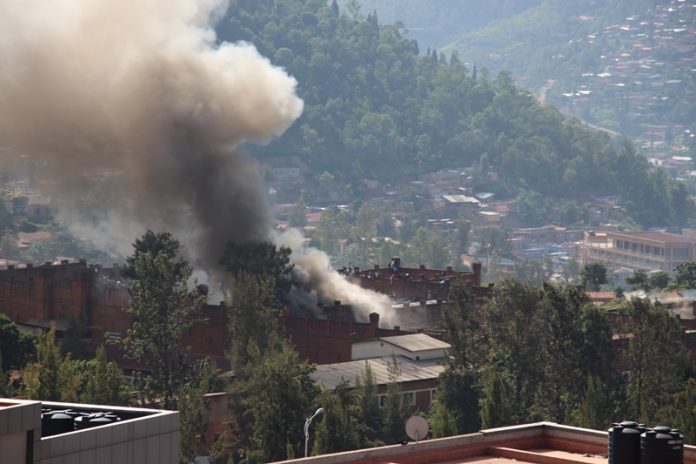 Fire gutted Kigali Central Prison known as “1930 prison” in the afternoon of the 25th of December 2016, ironically on the day of Christmas celebrations in the rest of the world. The fire incident happened when people were still remembering a similar fire incident in Muhanga prison in central Rwanda on 05 June 2014, which was followed only a month later by another fire in Gisenyi prison on the 7th of July 2014.

The fire in Kigali central prison, which allegedly took over all the prison services unawares, was announced only by the press and the cause of the fine is reported to be unknown to date. Images showing a thick black and opaque smoke coming out of the prison, lead to fears that damages caused could be more than what is officially reported, given that there is no independent investigation has taken place.

It is legitimate to imagine what the consequences of this fire could been on the prison inmates. It is known that what kills in a fire is not so much the fire but the opacity and toxicity of the fumes. Different sources reported incidents of panic among inmates and prolonged sounds of gun fire from small arms.

For the sake of transparency, we hope that all the light will be shed on the origin of this fire, as well as the damage, mainly in terms of human lives, caused either the fire or by the firing by prison guards. We dare hope that the inmates who tried to escape from this fire were not shot deliberately, on the pretext that they were trying to escape!

We may recall that in the case of Muhanga prison, the victims had been underestimated by the authorities and later for the whole of 2014, the public authorities announced that 30,000 prisoners could have escaped from Rwanda prisons.

Given this succession of fires that sporadically affect the most populous prisons (Kigali, Gisenyi, Muhanga), the FDU-Inkingi call on the Rwandan government to ensure the safety of prisoners who were at risk of being caught in the crossfire of the burning building and the shooting by prison guards.

We call on Johnston BUSINGYE, Minister of Justice and Attorney General, who bears the primary responsibility to safeguard the lives and safety of Rwandan citizens in detention centres, to ensure that international standards in relation the treatment of prisoners are fully respected and request him to take all necessary and appropriate measures to meet all legal obligation to protect and make prison centres secure.

How to get Switzerland phone number for SMS verification?